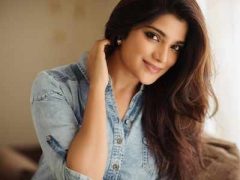 Aathmika is a popular Indian Actress who was born on 9th February 1993 in Chennai, Tamilnadu, India. She was born to Banuchandran and Nalini. Aathmika has one brother Moniesh Ramesh. She did her schoolings in Chennai and completed her Graduate in M.O.P Vaishnav College for women in Chennai. Basically, their family is from Coimbatore and later they moved to Chennai. Aathmika is one of the building actresses in this Industry she started her career from the recently released movie Meesaya Muruku. From her childhood days onwards her aim is to become an actress so that she has turned herself and acted in many short films. As she started her career now only, so Aathmika Biography will be very simple. You can even check out aathmika images.

Initially, she started her career as a model and after that, she has acted in many ads and also she has hosted TV shows too. When was acted in many short films, by impressed on her acting Aadhi called her for the audition and she was asked to act in front of him and he was impressed on her acting so he asked her to act opposite to him in Meesaya Muruku.

The main part of this movie which Aadhi expected was that the Tamil dubbing version should be done by that individual who acts and also her Tamil was good so Aadhi was much satisfied in the heroine part.

Her first film was Meesaya Muruku which was released on 2017 Indian musical romance film which was written and directed by Adhi of the musical Hip-hop Thamizha. Leading roles were played in this movie are Adhi and Aathmika where here Vivek and Vijayalakshmi played supporting roles. This film was produced by Sundar.C.Kushboo under Avni movies Production Company. Music composer for this film is Hip-hop Tamizha and U.K.Senthilkumar is the cinematographer. This film was released on 21st July 2017. Here all songs in this film were more sensational with her pretty face expression. The story of the film is based on Hiphop Tamizha. Well, here photos are mainly claimed as meesaya murukku heroine photos as you can search for many.

After this movie, Aathmika became very popular reviews from the audience side was also good since she is an upcoming actress feedback was all positive around all sides. Even her aathmika hd images riding on social media platforms.

Her next upcoming project is Naragasooran where shooting is going on which is a thriller film which was directed by Karthick Naren. Leading roles are played by Aravindsamy, Shriya Saran, Sundeep Kishan, Aathmika and Indrajith Sukumaran. Music composer of this film is Ron Ethan Yohann and Sujith Sarang is the cinematographer for this film.

After this movie, she was asked for an interview with Suryan FM from Chennai and she accepted for it and many questions were discussed. It was an interview with Adhi. For every question Aathmika replies with a smile I was selected from the Facebook, he saw my short films and he was much impressed and he called me for an audition. As soon I got a call from him I thought he is calling me to sing, and Aadhi said to come for the film audition. And I went to the set and was selected. Adhi says Aathmika will sing well her musical voice is good I have planned her to sing a song for my next film. Adhi says I chose Aathmika for her homely face, my thought was when it comes to audience face should not be new it must be familiar to everyone and I concentrated in Tamil fluency also and both were good so members there in the selection was very much satisfied with her acting. She acted well her exposure was not as the first film. Our set was as a college life; our most of the scene was shot in college we experienced as if we are going daily to college we all enter sharply by 8.00 am into the set. After the shooting is over for this film we all were very upset as we are going to disperse ourselves which was heart touching moment.

Aathmika acted well most of the scenes were taken in a single shot I carefully explained the story and initially we will discuss since all are new to this industry this was our first experience which we have done well I think. I said to all the crew members whatever you know you act in your style. Our team was new and it was stylish. Aathmika says I acted with a popular leading actor Vivek sir he was so friendly and I was happy for work with him.

Aathmika says I did not felt it as the first experience the set was so jolly and friendly and I learned a lot which will help me for my future work. Adhi motivated me a lot and I am happy that it was a different experience working with him. My friends also motivated my lot for this film which is a fun-filled film. The set was full of energy and I am really happy with the film.
And we traveled to Madurai, Chennai during our shot all supported lot and especially Madurai people supported me a lot and the response from the audience was heart touching. My ambition is to work with more and more different styles of the movie and to become a popular actress in this industry. I love to act in all languages in this industry and waiting for more projects in the future.

Aathmika’s real name is Aathmika Mahalakshmi she looks pretty young actress unmarried popular person in this industry. Her height is 163cm and her weight is 50 kg. Aathmika eye and hair color are black. Her zodiac sign is Aquarius. She resides in Chennai, and her hobbies are shopping, traveling, dancing and Gymming. She loves to sing always and her favorite movie is Alaypayudhe and she loves to see Popeye show in the cartoon. Favorite musician is A.R.Rahman and her favorite food is butter dosa, Masala Dosa, and Vada Pav. Favorite color is red and purple and her favorite director is Manirathinam. Trisha, Nayanthara, and Anushka are her favorite actress. Her favorite places are Switzerland and Bangkok. Also, she is very much active in Twitter and share lots of information regarding her work and appreciates other’s work as well.