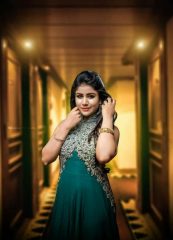 Alya Manasa was born on 3rd June 1992. She was born in Chennai Tamil Nadu India. She completed her schooling in Tiruchirapalli Tamil Nadu in champion Anglo Indian Higher Secondary School. She did her higher studies in Chennai Tamil Nadu in Ethiraj College for women. Alya Manasa is very favorite in dancing, she started to dance from her younger age itself she loves to dance she is a very good dancer also. Dance is the passion for her. In her childhood days, she has participated in many dance shows and has won many numbers of prizes. And she has also won much Applause from the audience side. Alya Manasa Biography is so clear as well as very attractive one. For more details, you can even check out alya manasa wikipedia.

Alya Manasa is very much interested to study other languages, during her 7th standard she studied Japanese language and she has won 2nd prize in all India level. Since she has won price on learning the Japanese language, the Central government has sent her trip to visit Japan. She is very fond of learning all languages she knows Germany, French, Japanese, English, and Tamil.

She is also very much interested in cycling and Chess games and she has also won prizes in all India level. From her childhood days itself, she used to be active always. She always has the habit of learning new things she has not dreamt to become an actress. Unfortunately, she became an actress by her dance performance in the reality show.

After completing her schooling and degree formally she studied dance and later she became a dance teacher for crew members and started a class to teach the students. She has taught dance too many numbers of students.

Initially, she came into this industry through Maanada Mayilada season 10 which was telecasted by Kalaingar TV and which was hosted by Kala master. She participated as a contestant in this reality show; her dance performance was very good during that reality show itself her fans was increased day by day. She participated along with her partner Manas. This show was directed by Kala master. After watching her performance in Dance reality show director Praveen Bennett called her to act in a serial. Director narrated the story To Alya Manasa, she accepted the serial to perform since she liked the story.

The title of the serial is Raja Rani which is the Tamil romantic serial directed by Praveen Bennett. For information, leading roles of the serial are Sanjeev and Alya Manasa. The serial is actually the remake of a Bengali language television serial Ke Apon Ke Por. The serial started to release in Vijay TV on 29th may 2017 from every Monday to Friday at 7 p.m. theme music composer for the serial is Ilayavan. The producer for the serial S Venkatesh Babu produces under Global villages.

She became very popular after entering into this serial, Sanjeev is a well-known person to Alia Manasa, she has taught dance to Sanjeev’s sister. Due to her innocent look and cute expression she has won many numbers of Hearts by this serial. This serial is very successfully gone and the rating was always high to the serial.

In the same year 2017 Alya Manasa has acted in song album called” Ill Thaka Seiya” In this, she has acted along with her partner Manas. Pushkar and Gayathri released their first look poster.

In 2017 she got a chance to act in a Tamil comedy-drama film Julieum 4 Perum which was written and directed by R V Satish. Leading roles were done by Amudhavanan, George Vijay, RV Satish, and yoga Anand. Here Alia Manasa plays the supporting role. Music composer for this film was Raghu Saravanakumar and the cinematographer is K.A Robin Bhaskar. This film was produced under Kavya Cinemas reach media solutions. This film was released on 7th April 2017.

Alya Manasa is so famous on Instagram how in a short period of life. She replied it’s all because of director; I should thank only the director who gave me this opportunity. Everybody forgot my name Alya Manasa they started to call me as Semba, this name has been reached to all over’s heart I am so happy that all loved my role. Initially when I joined in Maanada Mayilada which was the reality show in Kalaignar TV, I was so scared to dance in front of all cameras during my first shot I ran away back and all the judges called me and motivated me, and they said don’t fear to think that we are all your friends, you are just dancing in front of your friends. Wherever I started my career I will just take role model of a person and I will just encourage myself to bring me up.

Alya Manasa is famous in Dubsmashing you have a number of fans in Dubsmash how is it possible. Alya Manasa replied happily that I just started for fun, unfortunately, it has become more famous I am so happy for it. I should happily say that when I went to Malaysia there was a number of fans for me, all of them gave me gifts, I couldn’t carry the gifts. Actually, I paid for the luggage in the airport and brought it to my home.

I am so happy about it I have a number of fans all over. Even when I attend as a chief guest to colleges, everybody will ask me to do dubsmash with me. I’ll say no no just I’ll take a photo with you. Since I couldn’t do dubsmash with all the people. I am so happy that there are more views and fans for my dubsmash.

Initially, when the director of Raja Rani asked me to attend the serial, I just asked him, sir, how I could I do this innocent role, will it suit for me. Director replied no problem that I will take care of it. The very toughest role in this serial is a crying character. I’ll always be in smiling face only. In this serial, I poured the number of glycerine drops for crying character.

Alya Manasa is basically so sweet, kind-hearted person, and also her look is so cute her nickname is Semba. She is so famous in this industry within a short period of life. Alya Manasa eye color is dark brown whereas her hair color is black. Her height is 163 cm and weight is 50 kg. Her hobbies are dancing, singing and shopping. She focuses on her career since she is aiming to do more number of different roles in the future.

After breaking up with Manas, she fell in love with her co-star sanjeev. Well, Sanjeev made his debut in kulir 100 degree; unfortunately it was a failure for him. However, he also acted in some of the movies, but still failed to grab the attention of people. When sanjeev and alya start to work together in Raja Rani serial, it has became turning point for him. Also, people started to like them.

Later Sanjeev asked her about marriage proposal and alya were also accepted. Secretly, their marriage took place during the month of May 2019, but the news shared by them during September 2019 by Sanjeev in his social media account.

Well, months after a sudden wedding by this couple, Sanjeev also recently announced that his wife is pregnant. Even most of the people are very much excited after seeing alya manasa baby shower pictures which were gone viral.