Hina Khan is one of the most popular Indian Television actresses and focuses more on her roles only in the Small screen industry. She was born on October 2nd, 1987. Well, she was completed her MBA degree at CCA School of Management (Delhi, Gurgaon). She was so popular with the household name for the most popular TV show “Yeh Rishta Kya Kehlata Hai” and played the role of “Akshara Naitik Singhaniya”. Hina is gifted with brains & beauty, she is able to rule the hearts of each household to get a huge fan following.

2018 to Till Continued – Kasautii Zindagi Kay 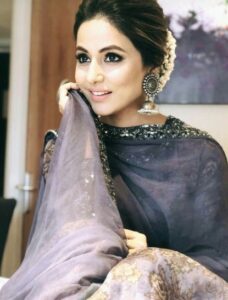 Hina Khan is based on a middle-class Kashmiri-based Muslim family residing in Mumbai, India. Her family belongs to Kashmir, Srinagar. Her father’s native place is Mumbai and her mother’s native place in Srinagar. She always loves to sing songs with her younger brother, Aamir Khan. Hina is very close with her entire family members. She says that they are her life and will never let them down under any situation.

Currently, her marital status is single or unmarried. As per the report, she is dating the most popular and well-known producer of her debut TV show named “Yeh Rishta Kya Kehlata Hai”, Rocky Jaiswal (also referred to as Jayant Jaiswal). They both are intended to marry soon. She is interested in the relationship and accepted to share the images along with Jayant Jaiswal over the web or social media platforms. However, there is no confirmation about their marriage through the media.

Hina Khan started her career profession within the Showbiz industry by acting as a guest appearance in 2009, during the soap opera “Kayamath”. Later, she showcased her at a guest for two different reality shows such as “Chand Chupa Badal Mein” and “Sapna Babul Ka…Bidaai”. She also appeared as a Guest for the most popular cookery show named “Chef Pankaj Ka Zayka” and performed well during those shows.

She also becomes more famous in the popular TV serial named “Yeh Rishta Kya Kehlata Hai” by playing the role named “Akshara in Star Plus”. After completing her studies, she applied for an Air-hostess course and waiting for the confirmation to join. She suffered from Malaria and not able to work on it and accepted the acting offer. Hina got a huge reputation across the viewers and till now performing well with her characters or roles. The most popular TV serials have successfully completed more than 1800 episodes.

You may also like: Mr.Faisal shaikh Biography, Career, Personal life