Mrudhula Bhaskar is an Indian actress who is typically seen in Tamil films. The exquisite actress is a passionate dancer too. She has a radiant smile and her eyes express various emotions gracefully. The film “Marumunai” which is a Tamil film is her first film. The film is a Tamil language film. To know more about Mrudhula Bhaskar biography, please continue reading this post.

The gorgeous actress hails from Bangalore, Karnataka. Her family details are unknown. She is a Hindu and is married. She did her schooling in Bengaluru itself. The name of the school that she went to is CMR National Public School. She went to continue her studies at Christ Junior College. She finished her graduate degree in Law at the CMR University. But she was passionate about classical dancing and opted for an acting career. She has also worked as a model.

The elegant actress was born on 6 December 1992. Even though she is quite young, she has proved herself as a great dancer and actress. She is an ambitious person. Her passion for dancing led her to establish a school for a dance called “Nrithyamoksh School of Dance”. She runs the school and functions as the artistic director of the school. She now resides in Bengaluru, Karnataka.

Mrudhula runs the school with the aim of educating youngsters in the field of Bharatanatyam. She is a follower of VazhuvoorBaani style which is one of the styles of Bharathanaatiyam. Being an evolved version of the Pandanallur style, the abhinaya in VazhuvoorBaani is more realistic rather than being ritualistic. 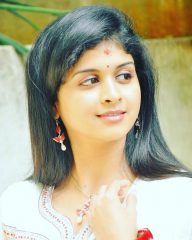 The actress got married and her husband’s name is Prasanna Raghunathan. Details about her husband’s profession are unknown. Her stage name is Naveena which is also her nickname. She stated that she was acting since she was three years old. The actress also said in an interview that she never had any interest in acting. Know a lot of interesting things about her career and life in this Mrudhula Bhaskar biography.

Mrudhula Bhaskar made her debut in the film “Marumunai”. The film was directed by Mariesh Kumar and arrived at theatres in 2014. Her character was named “Charumathi” and she did pretty decent acting in the film. But the film did not gain much attention from the people and was a commercial failure. The film did not do much to the career of the actress except for being an entry point. But this did not discourage the actress and she waited for a good opportunity to showcase her talents.

After the failure of her first film “Marumunai”, Mrudhula’s second film called “Vallinam” was released in the same year. This film marked a turning point in her career and earned her positive reviews. The film had an ensemble cast of Nakul, Atul Kulkarni and Siddharth Jonnalagadda. The film was praised for its story theme and appreciated by people and critics alike. It was directed by Arivazhagan and the producer of the film was V.Ravichandran. It was a box office success with a collection of about ₹125 million. Compared to the ₹60 million dollar budget, it is safe to say that the film became a massive hit.

The director Arivazhagan chose Mrudhula since she was a classical dancer and would be perfect for the role. Acting came easier to the actress as she knew how to express emotions due to her expertise in Bharatanatyam.

The charming actress made entry into the Telugu cine field with the film “Ice Cream 2”. The film was directed by Ram Gopal  Varma and was released in the year 2014. Mrudhula played the role of a female short filmmaker with J.D.Chakravarthy who played a burglar character. The film was reviewed negatively by critics. It is the second part of “Ice Cream”. In this film, a song was present with Mrudhula wearing a bikini.

Mrudhula acted in a Tamil film called “Thilagar” and it was released in the year 2015. The film was directed by Perumal Pillai. Mrudhula acted alongside Druvva and Kishore in this film. It did okay in the box office but did not gain much popularity. Since some real-life incidents were the inspiration for the film, the actress had to do some homework before she could act in this film. She studied the analogous characters portrayed by the actress “Sripriya” in other films.

The Kannada film “Bablusha” was Mrudhula’s first film in the Sandalwood industry. She played along with Harsh Arjun and Shamanth Shetty. It was released in the year 2016 and had a historical theme. The story for the film was inspired by true incidents that took place in the year 1501 in Mallinathapura. It was directed by Venkat Bharadwaj.the entire film was completed within a short span of 24 days. It received mixed reviews from critics.

The elegant actress has also performed in Naradha Gana Sabha in Chennai. She showcased her dancing talents in the stage and stole the hearts of people with her graceful performance. She learned dancing from the late Padmini Ramachandran of Bengaluru.

Mrudhula Bhaskar has proved time and again that she is a multitalented person. She has great things in store for her in the future. We wish her good luck both in her acting career and in her dancing career!