In this article, we will see about Anchor Nakshathra Nagesh Biography. She is a popular anchor and Indian film actress and she works in Tamil television industry initially she made her first television show Vaanavil in Thanthi television channel and after that she became famous anchor when she started hosting reality singing show Sun Singer on sun TV she is very talented and beautiful person and she has also acted in many short films. 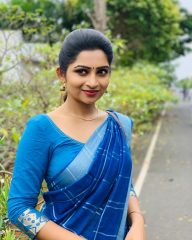 Nakshatra Nagesh was born on September 11th, 1992 in Chennai Tamil Nadu and India. She was born to the couple Nagesh and Nalini she has and younger brother Nakul Nagesh. She did her schoolings in Chettinad Vidyashram School which is located in Chennai and she completed her graduation in IHM University Chennai.

Nakshatra Nagesh is a very talented and beautiful actress she has entered into this industry at the age of 22 she is a very popular anchor she is fair in complexion with bubbly cheeks and cute smile her height is 158 cm and weight is 54 kg her eye and hair color is black, her hobbies are reading books, dancing, singing and listening to music.

Nakshatra Nagesh completed her school and college life in Chennai Tamil Nadu but she is originally from Dubai while studying in her college and school days she took her primary languages as English, French, and Hindi so she can very well write and speak fluently in Tamil, English, French and Hindi languages.

She was a very talented girl in her school days she was very good in studies and also she was interested in extra-curricular activities she used to participate in all cultural activities which are conducted in her college and school days. From her childhood days onwards she is very much interested in dancing she used to play songs and dance, she did not take classes for dance but still, she is an expert in it.

She is very passionate towards dancing she loves to dance so during her college school days she used to participate in all cultural programs like dance, singing and she used to perform her talent in the stage.

She will be in a smiling face always. In shooting spot also apart from shooting she used to spend her time happily with her friends. A very smart and energetic Nakshatra, her way of acting is different and the expressions given by her will be as if she entered into the character and will expose her feel.

Nakshatra Nagesh did her bachelor degree in an institute of hotel Management catering technology and applied nutrition in Chennai University, only because of her brother Nakul she entered into the television industry she initially was introduced her acting in the Tamil television serial Vani Rani along with Vicky Krish.

Initially, she started her career as an anchor where she hosted a show called Vaanavil in Thanthi television channel, she showed her excellent performance in her anchoring through that opportunity she had an offer to work on sun Network channel now she is hosting sun Singer program which is telecasted on sun television network for the 4th year.

Basically Nakshatra Nagesh did not aim to become  anchor, when she was doing her college days her friends requested her to do short films and only because of them she started doing short films and later this came good results and also response was also positive so she started doing short films in part-time of her studies, and later she has done for about nine short films and through that she got an opportunity in television through her friend and she went to attend the audition on the Thanthi Television channel and she was selected in it. And later after watching her performance she got the opportunity in sun network and currently she is working in the sun network.

And intermediate to that since she loves dancing she went to participate in the reality dance show which was hosted in Vijay Tv and she showed her excellent dance performance in the show Jodi number 1 season 8 episode, she was congratulated by all the judges for her performance and later she again continued with her anchoring job in the sun network.

And by the year 2013, she got a chance to act in the television serial Vani Rani she was selected by her performance in her anchoring field. And now currently she got an offer for another serial also.

Initially, she started her television career in sun Singer which was telecasted in sun television channel in that she played as an anchor role.

After that she when to a reality show Jodi number 1 season 8 which was telecasted in Vijay television network in that she played as a role as a dancer.

In 2013 she got an opportunity in Tamil television serial Vani Rani which is telecasted on a sun television network, and the director of the show is Radhika Sarathkumar in that she plays as a Rudra role.

And now currently she is playing in Lakshmi stores is also a serial which is telecasted in sun television network in that she plays as a Bhagyalakshmi role.