She had completed her engineering degree. Mostly she has concentrated on acting in Tamil movies and she is famous in South Indian film industry.

Ramya Pandian completed her schooling in Pushpalata Matric Higher Secondary School which is situated in Tirunelveli. And she completed her higher education in medicine concepts and biology for healthcare systems. After then she had completed her bachelor degree in Biomedical Engineering at Guindy Anna University Chennai. 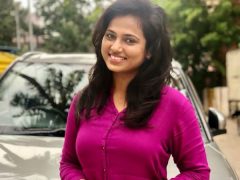 Ramya Pandian looks cute with black color eyes. She looks completely fit in her structure with perfect weight. Her height is 5 feet 5 inches that is 165 CM and her weight is 56 kg. When it comes to hair color is dark brown. Her hobbies are singing, listening to music and reading books.

Initially, after completing her engineering degree she entered into the South Indian film industry and she has done some of the short films with her close friends. Only with her short films she was spotted by the famous director Raju Murugan and she was given an opportunity in the film Joker and she played an important role.

In her first film, she was credited positive rewards and she was nominated for several awards for the film Joker. After then she got many movies in the South Indian film industry. And also she had done a lot of photoshoots which is being viral on social media.

Since her family is from educated background and her father’s wish is to complete a degree and then she can enter into the film industry. According to her father’s wish she did her engineering degree. Ramya was also the topper in her studies. She is a very good sports player and during her initial days, she was more focused on acting.

She used to play many dramas during her school and college days. During the time when she got an opportunity to play in short films, she happily joined with her friends. And due to her expression and acting was excellent, she was spotted by a famous director Raju Murugan for the famous movie joker.

Initial days she was more popular in her short films she has done a short film named Maane Theyne Ponmaane. In the short film, she became more popular she acted herself in the Tamil language.

After then she had also show acted in Koondhalum Meesaiyum. This is also a short film in which she acted herself in the language Tamil.

In the year 2015, she has done Dummy Tappasu in which she acted in the Tamil language. And the role played by her.

In the year 2016, she had an opportunity by the director Raju Murugan in the film Joker. In this film, she played the character Mallika and she was given the important role in this film. She has become very popular in her first movie itself and she was nominated for many awards for this movie Joker.

In the movie Joker, she played opposite to guru Somasundaram. She played as a heroine role. Along with her Gayatri, Balamurugan, Bava Chelladurai was also in this movie. Cinematographer of this movie is Chilean and the music composer is Sean Roldan.

By the year 2018, she got another opportunity to play in the movie Aan Devathai in which for this movie also she was given the important character role and she played as a Jessie character in the Tamil language. Other characters in this movie are ilavarasan, Kasthuri, Ramya Pandiyan, and Samuthirakani. This film was produced by Fakruddin and music composer is Gibran. The cinematography was done by Vijay Milton this movie was directed by Thamira.

Ramya pandiyan in cook with comali

Recently, she was also seen in the popular programme called Cook with comali. It was highly popular among the people, as that programme telecasted in Vijay TV. However, before that programme, ramya pandiyan was popular for sharing the photoshoot pictures. After that, she was pretty much popular and asked to attend the opening ceremony of many shops across the state.

However, she has reached the huge population due to the famous programme cook with comali. Even we can see that huge number of fans are getting increased after this show. Hopefully, due to her popularity, most of the movie makers are claiming that she will be soon acting in more movies. On the other side, to keep it in touch with her fans, she is also very much active in social media platforms as well.

When you are really interested in following Ramya pandiyan, then you can even go ahead with social media platform like Twitter. Yes, often visit here and stay active to keep in touch with the people. In order to promote the movie “Dharala prabu” to watch on Amazon prime, she was also promoting over the twitter. On the other side, she used to share the posts and make her status always active. After seeing this, most of them of her fans are keenly await to see on big screen.

Apart from sharing the posts, she also used to share the latest photos and videos during this pandemic. After seeing those pictures and videos, people are pretty much excited to see her on big screen. So, people who would like to check out her status regularly, you can even follow her official Twitter account at any time for sure.

Now, people are very much interested in watching her on movies soon. Even she is excited to be a part of good shows and movies in future. However, covid 19 plays a vital role and stops most of the people work. Hopefully, everything will be handled in a smoother way and people will get a chance to back to their track for sure. Even we could able to see that Ramya pandiyan share most of them related to covid19 posts on her twitter account.

Recently, Ramya pandiyan has shared the video with caption “Farm to fork”. She shared something about fresh harvest over green gram spinach during this quarantine period in her place. Apart from harvesting, done with cooking as well. Now, this video has been shared by her in Twitter and most of the comments were given by followers like best organic way and good thing to follow. Even that video trigger most of the people who are handling these quarantine days with family. Hopefully, people can expect more useful videos from her in the coming days through various social media platforms at any time.

Apart from her acting Ramya pandiyan made her modeling shoot. She has got many fans after that photo shoot, as she made a glamorous way. Currently she is a contestant in the bigg boss season 4. As many of the fans are connected with her social media. After she made entry into the bigg boss show, all her social media accounts are managed by her friends. As she is not interested in losing her fans during her missing time.

Her uncle is also an actor in the movies who is well known as Arun pandiyan and also her cousin sister is an upcoming actress. Her cousin sister’s name is Keerthy pandiyan. She managed a lot of works besides her acting works. Her favorite hobby is cooking and Ramya has learned many dishes. Luckily the quarantine made her spend more time with her family and also Ramya pandiyan has uploaded many videos related to cooking and also her photo shoots.

Her natural way of smile has admired many people and also the turning point was with the cook with a comali show. After that show she had a large number of fans to support her to the next level.